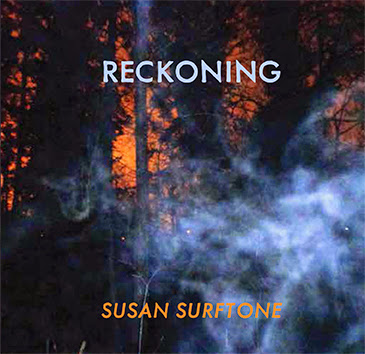 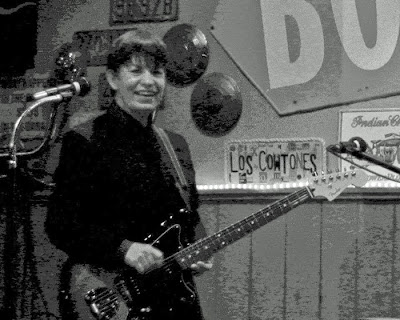 Embrace escapism, let the rain leak through the roof, and when everyone around you feels comfortably numb, make them move and shake like they have a life worth endangering. The swagger and punch of surf-guitar rock is essential. Essential in the process of experiencing the demands of pleasure that radiate throughout this planet… Susan Surftone returns to the fold with her latest record “Reckoning”, an attractive car crash of Link Wray, the Ventures, and The Raybeats.

“Mojo Junction” rumbles and slides into high gear with a slight homage to the classic “Pipeline” but twisted into a new surf anthem for a new millennium. Susan has a classic soloing style that brings to mind the raggedy lead playing of Dave Davies in his prime. “Circles” builds on the white heat, crashing and building with Johnny Thunders style dynamics allowing the sultry string bends to surf the raw tuneage.

The title track “Reckoning” displays a darker side of the wave spectrum, with a haunting melody that cruises the crisp night air in a wayward pining. A sparse and plodding heavy beat courtesy of Steve Kravac, gives this track a hypnotic psychedelic sound. Kravac’s drumming always compliments Surftone’s vision perfectly with a keen awareness to bold rock n roll structure. The follow up track “Secrets” is surf-party reckless fun with its flirtatious and bouncy go-go swing.

The track “Vortex ‘59” is a true standout among the recordings with its bright and menacing chord and solo combinations bringing to mind the best of the 80s garage-rock revisionist movement. Top-ten material in this reviewer’s universe, with its notably sharp and slick pop/rock collisions. The closing number “Mystery Train” provides just that, a saloon-blues infested one-way ride out of town, destination unknown…. Susan took some time to talk to me about her latest release in the following interview down below.

Learn how to make a free Electronic Press Kit

How does the new record differ from your past recordings?

“Reckoning” is probably a bit further away from what would be considered traditional surf music than I have gone yet. I think my three solo recordings have each moved progressively toward other influences. Also I’ve done my first slow original song on “Reckoning”.

Was there a different approach in the studio with the latest collection?

The new record was recorded at my producer, Steve Kravac’s, studio Hell’s Half Acre outside of LA. “Shore” and “Too Far” were recorded at Jackpot! in Portland. We used some different effects on “Reckoning” and one song has a twelve string on it.

Who is currently in the band and what are your tour plans?

Well, for recording it’s me and Steve Kravac. He plays drums and I play guitar, bass and keys. For tours there’s a line-up on the east coast and one on the west coast. West coast is Avory Gray (keys), Dan Ferguson (bass) Paul Barrell (drums) and East coast is Kim 13 (keys), Brian Goodman (drums). The bass slot is open right now. A documentary is in its initial stages right now so tour plans are dependent on when filming happens.

Do you think recordings or playing live benefit you more as a musician?

I think I’ve seen more growth as a musician from recording. I saw a big leap forward in my songwriting when I started to play bass on my recordings. It gave me a better understanding of how parts really fit together and enhance each other.

In the past two years since we last spoke, what changes have occurred in your life that had a profound effect on your outlook?

I broke my right hand last summer. I tripped and fell on a sidewalk while on the east coast in Hudson, NY. My first thought while lying on the sidewalk was “it’s over”. I have a chronic pain condition in my right hand as a result of a severed nerve and I didn’t know if my hand could recover from the break. The original songs on “Reckoning” were written shortly after the hand healed enough for me to play. As it turns out my ability to play is as it ever was. I learned sometime you have to get up and dust yourself off literally.

What inspired the intense cover art on your latest CD?

That photo was taken by me in a small park very close to where Avory and I live. We noticed the very strange red sky at night and thought it might make an interesting cover for the CD so we made several trips to the park to take photos. In some of them mist appeared. There is no photo shopping or anything like that. The cover is the actual photo. We didn’t see the mist until we got home and looked at the photos on my computer. We have no idea what that is but we do have other images with mist in them.

Have you witnessed the surf-garage scene growing bigger as you’ve toured and is there a new interest in the genre that you witness at your live shows?

I think there will always be a core audience for surf-garage but it does ebb and flow a bit. One thing I have noticed is more women are at the shows and are interested in surf-garage. I think that’s great although there is now occasionally a line in the ladies’ room.
-Kevin McGovern