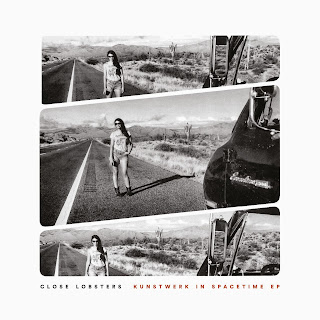 I was pretty stoked when I placed the new single by Close Lobsters on my turntable. Two songs of Love Spit Love and early Alarm catchiness with a brooding intensity well worth repeated listening. It conjured a memory of my awkward junior high days back in the late 80s and the cool mix tapes I would get with a diversity of bands consisting of The Alarm, New Model Army, Black Flag, and The Accused. I remembered a summer night at the local public swimming pool, where they would let the “teens” hang out, blare tunes, and have their own space for a few hours.

There was a really cute skate betty named Shannon at the get together that night, I was trying to impress her. I could barely get two words out of my mouth while I had New Model Army playing on my boom box poolside. At that moment, two creeps from the wrestling team decided it was time to lift me off the ground and throw me into the pool. I had to plead with the dimwits and they just dropped me on the concrete. I felt so stupid that I couldn’t pull some heroic move to knock these two goons out. Oh well, I would spend the rest of that summer recovering my self-esteem. I did run into Shannon again when I was 21, got her number, and never bothered to call her. Sometimes you can’t repeat the past and it changes its shape as you move on in life.

The Close Lobsters have made a nice explosion in their return to the scene of moody post-punk. The lead track “Now Time” has a classic picked apart chord opening with a nice drum break-in of Echo & the Bunnymen proportions. The guitar work is melodic and uses clean distortion mixed with tasteful chorus effects to compliment the atmosphere. If you’re a fan of early John Hughes films, this would fit in perfectly with those timeless soundtracks of youthful confusion, distrust, hope, and bright-eyed irresponsibility.

The follow up track “New York City in Space” has a hypnotic and slower paced groove that moves along with bluesy new-wave inspired interplay. Solid playing and carefully crafted songwriting shine through on this strong release. Close Lobsters are legendary in their own right, with their debut in 1986 on NME’s seminal C86 compilation and singles with Enigma Records that had serious airplay back in the days when college radio ruled the indie airwaves in 1988. Hey, that’s around the same time I was thrown around at the pool party. Perfect timing then and perfect timing now. Available on blood colored vinyl exclusively from Shelflife Records. Until next time and the time after that…
-Kevin McGovern