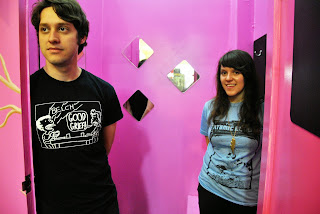 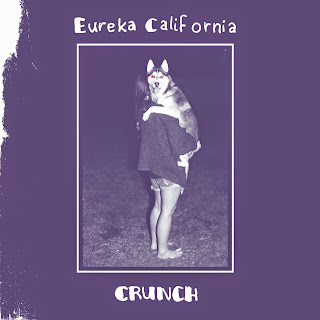 Athens, Georgia’s Eureka California have been active since 2007, with singer/songwriter Jake Ward remaining the only static member since their formation. On 2014’s Crunch (HHBTM Records), Ward bares his proclivity for higher knowledge once again, stating in the album’s opening track Edith (One Day You’ll Live In A Bunker) that “I’m a deep thinker, and I know who Descartes is.”

At times, Ward’s voice is reminiscent of that of Rhett Miller of Austin, Texas’ The Old 97’s: a pining, bourbon-drenched ode to someone or something lost long (but not too long) ago. On tracks like I Bet That You Like Julian Cope and Happy Again, Ward resembles a Teenage Hate era Jay Reatard: a snotty, vibrant display of corduroy angst. This comparison is eased by the overdriven, home-mixed touch that Ward has bestowed upon another quality recording, as he is also the band’s head studio man.

Rounding out the 1+1 equation is drummer Marie A. Uhler, who’s rhythmic tempos certainly help to magnify the band’s already prevalent Alt-Country-Polaris (the one off band from Pete & Pete, not the ATV company) sound. Uhler assists Ward in taking the listener to such locations in time as Berkeley ’89, London ’79, and Austin ’98 without ever making them leave the couch. The finishing track How Long Til The Medicine Takes echoes Roy Orbison, not so much in actual sound, but in chord structure, guitar tone, and the eerie, ethereal way Ward closes with a haunting reminder “It all seems normal until you sound it out”. – AD
8.2 / 10