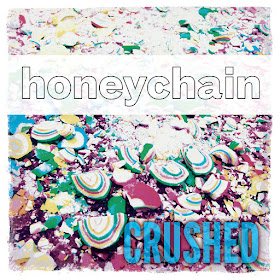 honeychain unleashes a tidal wave of pop fury and rock’n’roll rapture on their hot blooded new release Crushed. Passion and betrayal burn wildly through the amplifiers while the heartfelt harmonies flow like a cool breeze wrapping itself around the hedonistic beauty of Los Angeles. With the flirtatious bite of Beauty and the Beat and scratchy grandeur of Blonder and Blonder, Crushed delivers a seductive tapestry of modern day pop wizardry.

Hillary Burton continues to evolve as an intriguing and truly unique songwriter. Soon to be summertime anthems “Crushed”, “Messy Love”, and “Some Other Girl” twist and shout with shimmering choruses and unrestrained 60s garage finesse. Kim Shattuck’s intimate and raw production adds a new dimension to the band’s sleek and stylish sound.

“When I Stumble” and “Ready for the World to End” jangle and gently shake with Deborah Harry sass and Buddy Holly vibrations. The infectious “Three Horizons” devises a moody magnetic pull that relies on the band’s skillful rhythm section and carefully colored notes to create an unusual detour in their already impressive catalog. From the red hot album opener “Bombs Away” to the hypnotic acoustic closer “Welcome to My Life”, honeychain delivers an unforgettable listening experience.

It has been 3 years since your last record Futura, the world in 2017 seems to be a more paranoid and impatient place. Is the romance of rock n roll dead? If not, what role should it play in our ultrawired existence?

(HB) I think now, as much as ever, rock n roll is vital; not dead at all. Essential. An ultrawired existence requires a soundtrack!

If you had to describe your new record in three words, what would they be?

Crushed is an awesome collection of carefully crafted power pop rock. It has an understated aggression in its delivery. With themes of alienation, love, and betrayal, was there an underlying feeling or experience that you wanted to convey throughout these songs?

I didn't set out to convey a specific experience per se, rather i wanted this record to be a collection of songs that invoke varied emotions. All of those themes you noted are definitely ones that infiltrate my songwriting. Sometimes from personal experiences and other times from trying to understand what other people are going through.

“Messy Love”, the first single and video, is super catchy summertime bliss. It was embraced by your fans and the legendary KROQ. Is commercial success a goal or just a nice surprise?

It's a goal to share our stuff with as many people who will listen. I'm super proud of this record and my bandmates and I think the songs are strong. Commercial success, such that we reach a lot of people, is definitely a goal.

I especially love the songs “Crushed” and “Three Horizons”. Can you tell me the story behind these two stellar tracks...

That's cool you like these two. They are super fun to play live. Crushed has a bit of vulnerability in the lyrics but takes that vulnerability, (the expression of ones shortcomings) and 'i won't sit around just to watch you leave' and basically in the end is about me saying F you, 'sometimes being crushed isn't enough' in that i will always land on my feet.

Three Horizons is about the realization shortly after being with someone that it just isn't going to work. It's not autobiographical. Although there was this one blind date...It's really just influenced by my observations and putting myself in the place of people who have to go through a lot of meaningless, short-lived romances.

You do an amazing cover of Kathy Valentine's “Some Other Girl” on the new record. When did you first hear the original and what inspired you to cover it?

I bought the 45 record by The Textones (her pre Go-Go's days band) when i was like 13 or so. I immediately fell in love with the song. Kim (Shattuck) actually took me to an engagement at the grammy museum and introduced me to Kathy and as coincidence would have it, it was not long after i had made Kim a mix CD of cool tunes (yeah, i still make mix CDs for friends like when I was in jr high making mix tapes ha ha) and i had put the song on it. I gushed to Kathy how i loved that song. Fast forward a few months and after I had sent Kathy a download of the FUTURA CD, we, honeychain, opened for Kathy's current band, The Bluebonnets, in Los Angeles. Then a conversation took place, maybe via email I can't remember exactly, but I asked what she thought about honeychain covering Some Other Girl and she was super supportive. She really likes the version we did and has been kind enough to mention it on twitter and facebook. The Go-Go's have always been one of my biggest influences and she has always been one of my favorite songwriters so to cover a song she wrote and have her like it, is super surreal to me.

The band is now a power trio instead of a four piece. Do you find it easier or more difficult to deliver the songs live?

There are a few songs we can't do live as well without Emma (who was our bass player and back up vocalist and appears on the record but has since left the band to devote her time to political causes and candidates that she is passionate about). But most of the songs on both records sound super cool live as a power trio and Andre has done an awesome job jumping from guitar to bass and picking up some more back up vocals to boot. We, Loye, Andre and I also have a handful of new songs we've added to our set over the last few months. Whereas it was super cool when Andre was on guitar too, I'm now super spoiled being the only guitarist and therefore always being able to hear myself!!!

Do you feel that music is your full time occupation or do you prefer to have it as just one aspect of your life? What feeds your passion on a daily basis?

It's an integral part of my existence. Like oxygen. I always tell my kids that the greatest thing they can do with their lives is to make other people feel loved and i'm passionate about trying to reach people through music in that i've had some people tell me they've been brought to tears by songs (Than You) to having felt understood (Violet) and as a songwriter, connecting with people like that, drives my passion sometimes for sure as i'm actually pretty shy sometimes and not the best verbal communicator, so reaching people through songs is something i'm super thankful for.

Does new music inspire you or do you prefer to listen to the classics? What artists in your music library might surprise people?

I'm inspired by both older stuff and newer stuff. I love Patsy Cline to Greenday. I'm also fond of the (new) band Skating Polly and their very raw and almost innocent approach to their music and lyrics.

Surprises hmmm, I love Arctic Monkey and The Vines. I love old honky tonk. A few random songs in my collection people might find surprising:
Genius of Love - Tom Tom Club
My Life Would Suck Without You - Kelly Clarkson
Cry - Tammy Wynette

You also drum for the Pandoras. How did that come about and will you be recording new material with them?

I was asked to go on a tour of Europe with them when their drummer at the time, Sheri, was not able to. Kim knew I also play drums so she asked me. This was fall of 2015. I stayed on as their drummer. We recorded some tunes together last year that, along with some tunes that were recorded with Sheri before I joined the band, will be released later this year. Stay tuned!!

What does honeychain have planned for the summer and when is the next single dropping?

The title track, CRUSHED, is the follow up to the first single, Messy Love, and people have been loving it, which is super rewarding.

We have our record release show scheduled for June 17th at Th Redwood in downtown LA, which is a place we've played at a lot and we love it there. Joining us are our pals The Touchies and Kim Shattuck is going to do a special solo set.

We are also going on a mini tour (Vegas and Arizona) with The Touchies in August which is going to be all kinds of fun.

We also just tracked our cover of the Material Issue song Going Through Your Purse which will be released later this year for the Girlsville / Nerve Centre Records Cassette Day comp. 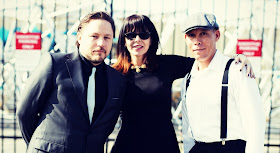